Biography:
Jim Hanley was born and raised near Buffalo, NY, where he grew up fishing on Lake Erie. He began fishing with his Dad, an avid lake erie walleye and smallmouth bass fisherman, who passed his love of fishing onto Jim.

During the late 1950′s and early 1960′s, Lake Erie NY, was an environmental mess. Rumors of fires starting on Rivers in Cleveland and Buffalo due to the excessive waste floating on the surface kept tourists and even locals from using Lake Erie. Efforts from the number one environmental group, fishermen and hunters, started the cleaning process and Lake Erie is now once again the premier smallmouth bass walleye and musky fishing lake in the Country.

Jim began to show his stuff at age 6 when fishing with his parents on Lake Erie, he caught a 4 lb smallmouth bass. In 1958 that was equivalent to a 7 pounder today…the Old Courier Express carried the story.

In the mid 70′s the BASS Tournament craze really began to hit America. Jim attended a seminar in Buffalo, New York with Ray Scott, Tom Mann and Rick Clunn from the Bass Anglers Sportsmen’s Society and the following year entered his first Major BASS Event in the Thousand Islands. He finished low in the standings in that first event but that set the tone for a never fail attitude that lead him to be the only NY fisherman to compete in the 1st ever BassMaster Elite Tournament in 1985. He began guiding friends and family for smallmouth bass, walleye and musky in that same time frame and it was only a matter of time that his reputation began to spread.

He guided on Lakes Marion, Kissimmee and Toho in Central Florida in the mid 80′s during the winter months and the summer on Lake Erie. Many of his customers fished with him in both New York and Florida and been with him ever since. Jim also taught on the Bassmaster Teaching Seminar Series.

On his off days and in the winter months Jim works as a video operator, cameraman and stage manager for the Buffalo Sabres, Buffalo Bisons, UB Football, college basketball, college lacrosse and boxing as well as ESPN’s “The BassMasters” TV Series. He also shoots commercials and at times is featured in them.

Jim's seminars are brought to you by Smooth Moves Seats and Off Shore Tackle. 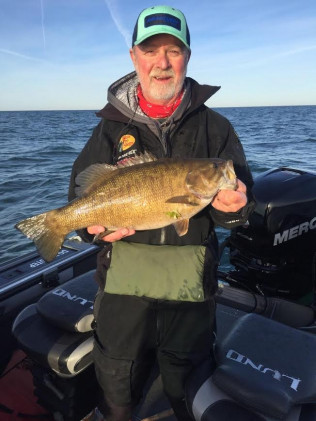