Capt. Frank Campbell of Niagara Falls with Niagara Region Charter Service is a full time guide with over .20 years of guiding experience on Lake Erie, Lake Ontario, and the Niagara River. Spending an average of 200 days a year on the water has enabled Capt. Frank to be one of the most knowledgeable skippers in Western New York. He has been featured on numerous television shows including In-Fisherman, Keith Warren Outdoors, O’Neil’s Outside, Bob Redfern Outdoors, Mid-West Outdoors, and Angling the Great Lakes along with the CBS Morning Show. He has also been featured in media print for many magazines including In-Fisherman, Outdoor Life, Fishing Facts, Salmon Trout & Steelheader, Great Lakes Angler, New York Outdoor News, Lake Ontario Outdoors, as well as in ESPN Outdoors.com. Campbell also gets involved to give back, serving as the chairman of the Niagara County Fisheries Development Board for over 10 years and also served as chairman of the Board of Directors for Niagara Tourism and Convention Corporation. His seminars are extremely informative, whether you are someone just starting out or a long time veteran on the water. 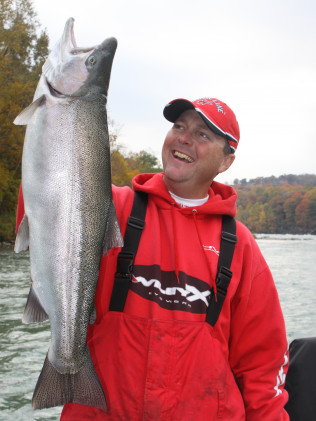