BIO:
CAPTAIN JIM SKOCZYLAS
Jim Skoczylas is from Sheldon, New York where he enjoys the great outdoors. Jim began hunting and fishing as a child in the woods and on the waters of Western New York, with his grandfather and father.

In 2011 Jim decided to take his enthusiasm for fishing to the next level and obtained his Charter Captains License. Since then, Jim spends his summer chartering on the Eastern Basin of Lake Erie aboard his 27’ Baha Cruiser, running Ultimate Adventure Sportfishing (716-796-5372). While out running charters, he enjoys teaching his clients about the game changing products to successfully catch Walleye and Perch. Ultimate Adventure Sportfishing donates many volunteer hours to several local charities.

Jim led his tournament team to victory at the 2012 AmaraCan Walleye Classic Championship out of Dunkirk Harbor with a record breaking weight of 80.30lbs for 10 fish. He also led his tournament team to victory at the 2013 Sunset Bay Shoot-Out for the heaviest Walleye division, with fish weighing at 10.93lbs.
When the leaves start to change he trades in his fishing rods for hunting equipment, where he enjoys pursuing small and big game alike with his family and friends. On and off the field he is always willing to help fellow sportsmen and women learn new techniques and products to pursue their trophies.
As the year moves on and the snow starts to fly you will find him out on the local snowmobile trails of WNY.

“Please remember to take a kid out hunting and fishing. They are our future sportsmen!” 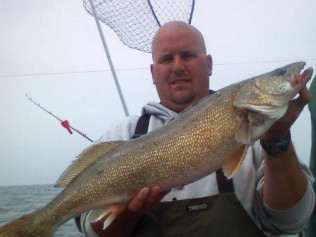